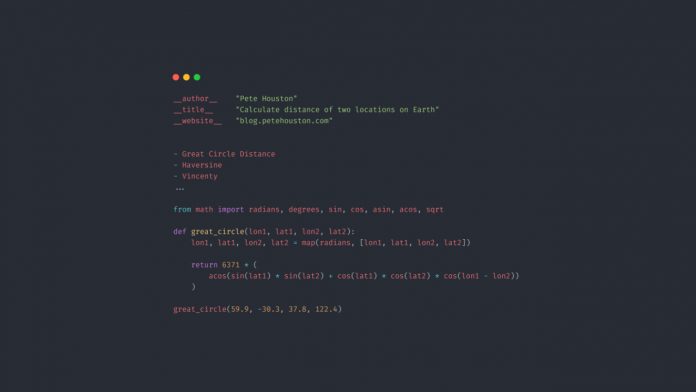 We will discuss about geographic calculation in this article, and that will be how to calculate distance of two locations on Earth using Python.

Is it really possible? The answer is “YES“, not 100% accurate but pretty close, good enough to use for your apps.

In facts, you’re not the only one that think of this problem, many researchers have been working on solving this mathematical problem. As a result, there found several formula for this depending on calculation models.

Those formula will take inputs as GPS coordinates (latitude, longitude), and return the approximately distance.

If you need coordinate values, checkout this post about geocoding.

The Great Circle distance formula computes the shortest distance path of two points on the surface of the sphere. That means, when applies this to calculate distance of two locations on Earth, the formula assumes that the Earth is spherical.

The radius r value for this spherical Earth formula is approximately ~6371 km.

The implementation in Python can be written like this:

Haversine formula is also another formula to calculate distance of two locations on a sphere using the law of haversine.

Translate the formula into code, this is my Python script:

Vincenty’s formulae are two related iterative methods used in geodesy to calculate the distance between two points on the surface of a spheroid, developed by Thaddeus Vincenty (1975a). They are based on the assumption that the figure of the Earth is an oblate spheroid, and hence are more accurate than methods that assume a spherical Earth, such as great-circle distance.Wikipedia

It requires a lot of computation in Vincenty formula in order to calculate the distance of two locations on Earth; especially, the iteration to compute the delta-sigma until there is no significant change. Usually, 10e-12 (approximately ~ 0.006mm) is good enough for accuracy.

Check out the Vincenty implementation by Nathan.

Most of Python geographic libraries provide those distance formula.

You can try to calculate distance of two locations (based on GPS coordinates: longitude and latitude) with following libraries:

Depending on requirements, you will need to decide which formula is appropriate to your apps.

Generally, the Haversine formula seems to be the appropriate one most of the time.

Check if order was created by customer or admin in Magento...

Check if order was created by customer or admin in Magento...

Find out what is listening on a given port

Disable cache for block in Drupal 8+

Hi there, I'm Pete Houston, a software engineer. I typically spend my days on building products and applying new technology stack everywhere. Moreover, I believe in education that will help changing and making the world a better for everybody.

This is my personal blog where I write coding tutorials, programming guides, tips and some stories around my life.

If you want to learn programming, or want to get in touch with me. Don't hesitate to drop me a line via email.

List all containers in a single pod in Kubernetes

Config for X-Frame-Options for the web